Topping is a form of pruning that should be avoided because it can be harmful to your tree’s health. Topping is done by cutting limbs back to stubs instead of branches and can lead to the dieback of branches, decay, and death of the tree. It can lead to rapid growth of weakly attached limbs and potentially hazardous situations, as well as encourage disease and insects to attack a tree

Why do homeowners use tree topping?

The most common reason given for topping is to reduce the size of a tree. Homeowners often feel that their trees have become too large for their property and fear that tall trees may pose a hazard. However, this is not a viable method for height reduction and does not reduce the hazard. Topping can actually make a tree more hazardous in the long term because the new growth that forms is weakly attached and grows at an accelerated rate. These elongated shoots are more brittle than the original structure of the tree and are more prone to breaking.

Topping often removes much of the leaf canopy of a tree. Since leaves produce food for the tree through photosynthesis, this type of pruning can temporarily starve a tree and create a vast amount of stress. If a tree lacks the stored energy required to create new shoots, it can weaken and die. Tree Topping can also harm tree bark through sunscald and alter the process by which a tree forms food causing starvation and stress.

The large cuts made when topping a tree expose the tree to an increased amount of disease and insects. Because of the stress caused by removing the canopy of the tree, it becomes more vulnerable to these attacks and is less likely to defend itself against attacks. Large wounds also take longer to compartmentalize and close, thus increasing and intensifying the exposure of tissue to decay.

Due to the increased rate of growth on an amplified area of decay, a topped tree can grow taller faster, but on a now structurally weakened limb. To mitigate this process, frequent re-topping is needed. Topping is a high maintenance pruning practice that continually needs to be performed, making it an expensive pruning practice. If not maintained, an increased liability risk must be assumed due to the potential of new shoots breaking. Topping should only be done as a last resort option and only after the negative impacts are thoroughly understood and a risk waiver signed.

A crown reduction is usually the best alternative to topping. While this practice does not always dramatically reduce the height of a tree, it does change the weight distribution of a tree. This is performed by trimming the upper canopy of a tree to a viable limb no smaller than 1/3 of the diameter of what is being removed. Thinning a tree also alleviates the potential of a tree to fail by allowing for wind to blow through the tree, not into it. If you have a tree that has previously been topped, corrective pruning techniques can be performed to help increase its structure and vigor. This generally needs to be done over multiple years and in multiple stages. 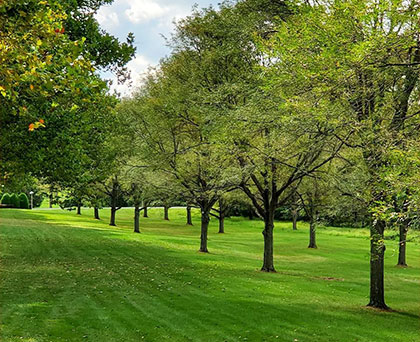 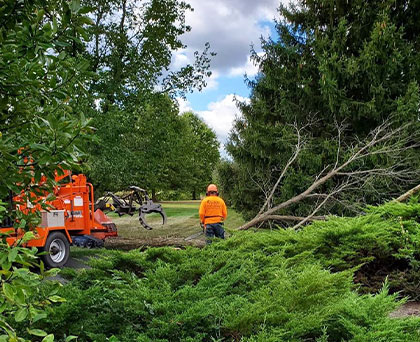 Our reputation of professionalism begins with the first phone call and extends from arrival on site to completion of the job. Led by our Certified Arborists and supported by state-of-the-art and well-maintained equipment, our staff will efficiently complete tasks using the most recent and
innovative practices in the industry.

Super top notch job!Leigh
Improve Your Environment & Enhance Your Landscape Contact Us Today
Links
See Us in Action Read Our FAQ Tips & Articles
Connect With Us